Share All sharing options for: Asus ZenBook 13 OLED review: dazzling, to a point

Seeing a laptop with an OLED screen at a sub-$1,000 price point is wild. Not too long ago, finding that display technology under $2,000 would’ve been unthinkable. But if there’s anyone I’d trust to make sub-$1,000 OLED happen, it’s Asus, one of the masters of affordable, portable laptops. And if there’s any combination of companies I’d trust to make sub-$1,000 OLED happen without a battery life disaster, it’s Asus and AMD.

My test system performs well, and the OLED screen is vivid and bright. You shouldn’t expect too much more than that, and there are a few significant drawbacks. But it’s an impressive showcase for AMD’s excellent processor and a decent buy for anyone who’s limited to this price range.

Contenders from the Ryzen 5000 mobile series that we’ve seen so far have been great performers with excellent battery life to boot. So I was interested to see how this system would perform against competing laptops with Intel’s quad-core Core i7-1165G7. That chip can be found in a number of the best laptops out there, including Asus’ own ZenBook 14 and Dell’s latest XPS 13.

Our review of Zenbook 13 OLED 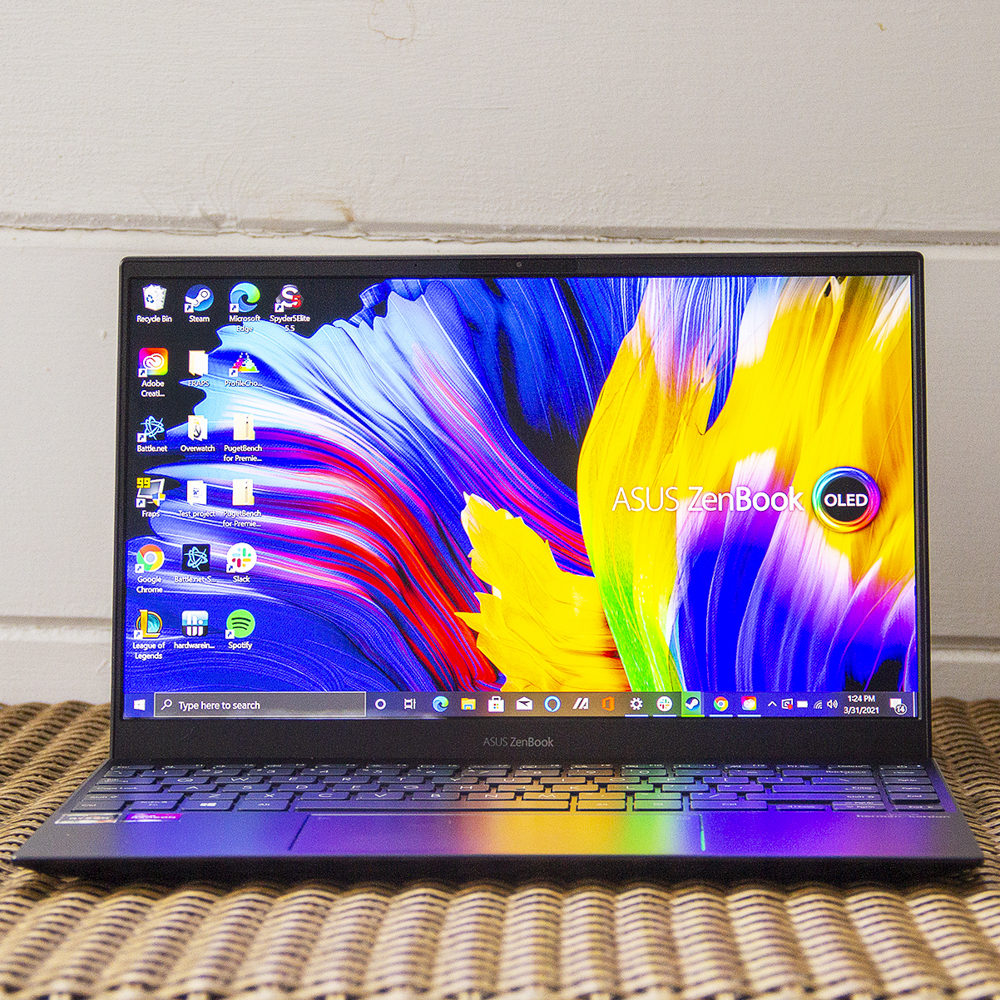 Most unsurprisingly, the ZenBook 13 OLED dominated both of those laptops on battery life. I ran the system through my daily workload (using around a dozen Chrome tabs with some Zoom calls, Slacking, Google Docs work, and streaming from Spotify and YouTube), and averaged 11 hours and seven minutes of continuous use. That’s multiple hours more than the results I saw from running the XPS 13 and the ZenBook 14 through the same workload, both of which have typically more power-efficient LCD panels instead of OLED. The device took 56 minutes to juice up to 60 percent during light use.

Not only is that an impressively long lifespan as laptops go in general, but it’s certainly the longest result I’ve ever seen from an OLED screen. The OLED XPS 13, which I tested out last week, lasted for less than half of that time. Part of the reason is no doubt that the ZenBook’s screen is only FHD (1920 x 1080) resolution, while most other OLED panels are 4K or close to it.

That resolution difference may be a dealbreaker to those with particularly discerning eyesight or to folks hoping to do color work, but this screen still looks quite good. You’ll notice the difference between an OLED and an LCD panel most if you’re viewing an image or watching a video: The per-pixel lighting produces brighter whites and darker blacks (since the pixels behind a black area just turn off).

The ZenBook 13 delivers vibrant colors and crisp details. It covers 100 percent of the DCI-P3 gamut and reached 368 nits in our testing. I did see some glare while I was working at lower brightness settings, but not enough to interfere with my work indoors. There’s no touchscreen option, which is a bit disappointing.

The eight-core 5800U worked just fine as my daily driver. It tore through dozens of Chrome tabs and apps with little to no heat anywhere in the chassis. I did get the sense that it was sweating a bit. I could often hear the fans, even when I wasn’t pushing the ZenBook hard. I occasionally saw the CPU jump as high as the low 90s (Celsius) during gaming, but it stayed at acceptable temperatures otherwise.

AMD’s recent integrated graphics have been fairly comparable to Intel’s Iris Xe graphics in the past, and while performance will always vary by title, that’s about what panned out here. The ZenBook 13 was most dominant on League of Legends, where it averaged 235fps. The Intel ZenBook averaged 200fps on that title, while the XPS 13 averaged 205fps. It also won on Shadow of the Tomb Raider, averaging 30fps on the game’s lowest settings. That beats the XPS (which averaged 22fps), and just barely beats the ZenBook (which averaged 29fps). It still loses out to the M1 integrated graphics in the MacBook Air, though, and barely hits a level of playability.

Results were more mixed on Overwatch, where the ZenBook 13 averaged 54fps on Ultra settings and 37fps on Epic settings. That beats the XPS once again but loses to the Intel ZenBook on both counts. Different strokes for different folks. Finally, the ZenBook 13 was drubbed on Rocket League’s maximum settings, averaging 60fps where the XPS and the Intel ZenBook averaged 111fps and 92fps, respectively. Rocket League has seen a number of updates recently, so that could explain the performance delta.

The ZenBook 13 OLED was also middle of the pack when it came to video workloads. The device completed an export of a five-minute, 33-second 4K video in 14 minutes and 14 seconds, which is a few minutes slower than both the ZenBook 14 (11 minutes and 28 seconds) and the XPS 13 (10 minutes and 43 seconds), and also slower than the M1 MacBook Air (eight minutes and 15 seconds). It’s not a surprise that the 5800U was weak on this test, as it lacks Intel’s Quick Sync feature. It was an improvement over the 15-inch Surface Laptop 4, which has a last-generation AMD Ryzen 7 4980U and took over 16 and a half minutes to complete the same task.

This ZenBook also scored a 201 on the PugetBench for Premiere Pro benchmark, which measures performance on real-world Premiere Pro tasks. That also beats scores we saw from last-generation Ryzen systems, such as the Surface Laptop 4 and the with a Ryzen 7 4700U. It loses once again, though, to the and the .

So that’s where we are on the processor. It’s a powerful eight-core chip that delivers outstanding battery life, with integrated graphics that aren’t quite Apple M1 level but are on par with Intel’s best. If you’re familiar with previous ZenBook 13 models, you can now skip to the end because everything else about this laptop is very standard ZenBook fare.

My biggest hangup on ZenBooks is always that they feel a bit cheap. There’s a fair amount of flex in the lid and keyboard and a bit of a plasticky texture throughout. (The bezels around the screen are also plastic, despite not being a terrible size.) The hinge isn’t the sturdiest, and the display flops around fairly easily if I pick the laptop up while it’s open. And the lid is a massive fingerprint magnet, which dampens an otherwise nice concentric swirl design. None of this is unexpected at this price point, and the ZenBook 13 is certainly nicer-looking than many devices you can get for under $1,000 — but it’s not comparable in build quality to an XPS or a Spectre.

To use the Asus ZenBook 13 OLED, you have to agree to:

That’s six mandatory agreements and 11 optional ones to use the Asus ZenBook 13 OLED.

Another potential issue is the port selection. You get two USB 3.2 Gen 2 Type-C, one USB 3.2 Gen 1 Type-A, one HDMI 2.1, and one microSD card reader. That’s fairly generous, except that there’s no audio jack. This isn’t as big of a problem now as it would’ve been a few years ago, but it could certainly be a dealbreaker for anyone who uses wired gear. (The device does ship with a dongle, but that still means your headphones or microphone will take up a USB-C port.) There’s also no Thunderbolt support since this is an AMD system.

Finally, the webcam is grainy and not great, even in decent light. It does support Windows Hello. (That’s the only biometric authentication; there’s no fingerprint reader.)

But the calling card of the ZenBook line isn’t build or ports; it’s portability. This ZenBook is actually a tad thicker and heavier than the Intel-based ZenBook 14, but it’s still thinner and lighter than the XPS at 2.5 pounds and dimensions of 11.97 x 7.99 x 0.55 inches.

Another fun feature modern ZenBooks have is NumberPad 2.0. If you tap a small icon in the top-right corner of the ZenBook 13 OLED’s touchpad, an LED numpad appears. I did accidentally whack this a couple of times while I was navigating but got better at avoiding it with practice. To Asus’ credit, you can still use the touchpad to navigate and click on things while the numpad is up without it thinking that you’re tapping numbers. Elsewhere, the touchpad is smooth and accurate, though the click sometimes came with a bit of rattle, and I occasionally saw some palm-rejection issues. The keyboard is more mushy than it is clicky, but it became fairly comfortable after I got used to it.

The keyboard is more mushy than it is clicky

For $1,000, the ZenBook 13 OLED is an impressive package. You get an efficient eight-core processor paired with an OLED display, in a thin and light chassis. There are some nice extra benefits (the LED numpad, the HDMI) and some drawbacks (the plastic look, the lack of headphone jack, the terrible webcam), but the screen and the processor are the stars of the show and the main considerations. While some of the drawbacks may be dealbreakers for some shoppers (they would be for me), many may see them as reasonable sacrifices in order to get this performance at this price point. If the latter is what you’re looking for, the ZenBook 13 OLED is one to consider.

How to responsibly get rid of the stuff you’ve decluttered

The best wired or wireless gaming headsets to buy