Some new specs aside, this laptop has changed very little since 2018

Share All sharing options for: Razer Blade 15 Base review: losing its edge

Razer’s Blade 15 Base isn’t broken necessarily, but it could use a tune-up anyway. It’s emblematic of the company’s excellent design chops — stuck in a loop of flexing it in practically the same way as last year and the year before.

The laptop’s all-aluminum build is still impressive to see and use. And yes, it has a webcam, unlike some of the gaming laptops we’ve reviewed recently. But the effect it gives off is getting stale, and Razer still hasn’t addressed all of the annoyances that have been present since this design debuted in 2018. It’s a magnet for fingerprints and smudges, and for a laptop that starts at $1,699.99, its lack of any biometric login method is baffling. You’ll need to type in your password or PIN every time you log in.

It’s no longer as ahead of the pack in terms of design as Razer might hope. Some competing machines, like Asus Zephyrus G15 and the MSI GS66 Stealth, are thinner, lighter, and priced aggressively to take on the Blade, with the same (or more) features in tow. 2021 could be the year when other manufacturers catch up or overtake it. 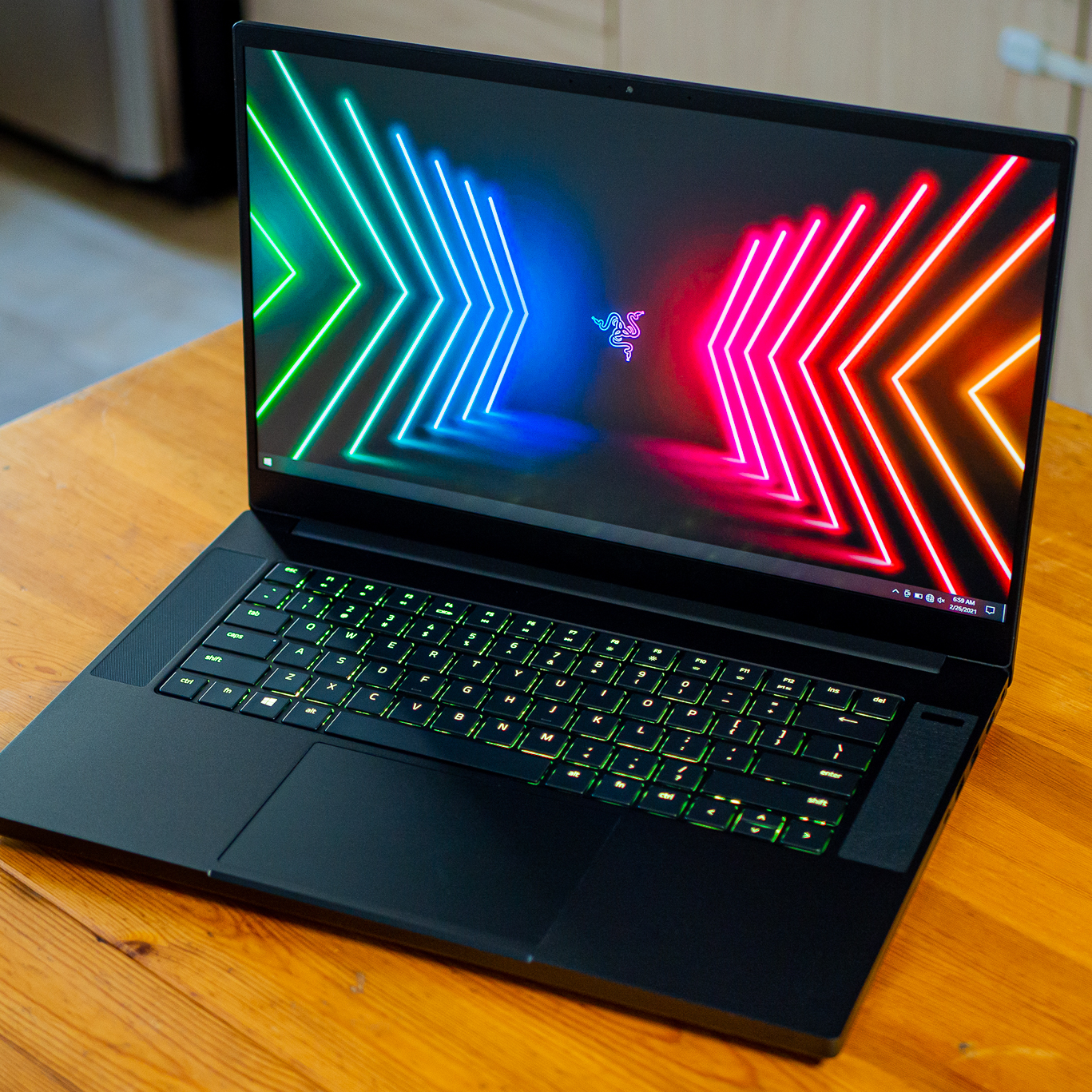 We’ll need to wait and see if Razer’s next steps for this laptop are more exciting than what the early 2021 model serves up, but at least some of the improved specs inside make it feel a little fresh. The $2,199 high-end “Base” configuration I’ve been testing features the Nvidia RTX 3070 graphics chip along with Razer’s first QHD screen in a laptop. Those are new specs for 2021, and Razer’s among the first to ship a machine featuring them both.

A few weeks after this review originally published in early March 2021, Razer fixed a serious issue with the way this Blade 15 Base handled switching between running on the dedicated GPU or Nvidia Optimus, a technology that switches between integrated and dedicated graphics as needed for efficiency and performance. It was set to Optimus by default, but switching to using the RTX 3070 exclusively caused the screen to permanently go black without a way to recover — requiring a full system wipe. With the Nvidia driver version 461.92, the issue has been resolved.

This laptop performed as well as I expected for gaming, given its RTX 3070’s specific specs. The updated driver that fixes the display issue didn’t impact gaming performance in a noticeable way, and our 4K video export test didn’t fare any better than before.

Razer recently started to publicly disclose the detailed specs of its GPUs on its site (which can vary wildly at the manufacturer’s discretion), as Nvidia now requires. The RTX 3070 graphics chip in this configuration has a maximum power draw of 95W with a clock speed of 1,290MHz (boosting up to 1,410MHz). Unsurprisingly, given this laptop’s thin build, the GPU can’t run wild compared to the likes of MSI’s GP66 Leopard. But that’s not to say it isn’t capable for gaming.

Red Dead Redemption 2 running at 1440p with ultra graphical settings enabled averaged 59 frames per second. Shadow of the Tomb Raider, also running at its highest settings with ray-tracing shadows set to ultra, displayed an average of 46 frames per second. I wanted to easily test more games, but I, unfortunately, ran out of space on the 512GB SSD that’s included by default with the Blade 15 Base. Of course, I juggled things around to get more testing done, but this amount of storage is insulting in a $2,199 laptop. It’s a minor consolation that more NVMe M.2 storage can be added with its second open slot, but you’ll have to front that cost. Back to testing, the open-world game Horizon Zero Dawn, with all of the graphical tricks set to ultra, ran at an average of 71 frames per second.

RAZER BLADE 15 BASE (AS TESTED)

The Blade 15 Base performs worse by a small margin when compared to the new Asus Zephyrus G15, which also features a QHD screen and a slightly more powerful RTX 3070 (same clock speed but with a higher 100W power ceiling). In real-world usage, you might notice Asus’ laptop doing a few extra frames per second better, like we did. Otherwise, performance should be similar. In short, it nearly meets the bar for smooth 60 frames per second gameplay at QHD resolution, and knocking down a graphical setting or two should get you there in most cases.

Interestingly, both laptops make ponying up more money to get the RTX 3080 in a thin laptop next to pointless. These machines perform nearly as well with QHD gaming as the MSI GS66 Stealth that has a QHD screen with an RTX 3080 clocked at 1,245MHz and 95W and costs $2,599. Doing some research could really put some money back in your pocket.

Like my experience with MSI’s QHD screen, I’m surprised that Razer’s QHD 165Hz refresh rate panel is its first in a laptop because it’s a very good first effort. The viewing angles are generous, the colors are rich but accurate, and of course, the big pixel density boost looks fantastic. The jump from 1080p to 1440p is noticeable during everyday tasks like hanging out in a browser or playing games. Text pops with clarity, and watching content or playing games in the native QHD resolution makes for a better experience than a 1080p panel can provide. I think it’s worth paying a premium for, and the extra $200 cost Razer asks is on par with other manufacturers.

Installing Nvidia’s latest driver (at the time of publishing) made it possible to switch between Optimus and the dedicated graphics chip, but it didn’t make exporting 4K video via Premiere Pro any faster. Our Adobe Premiere Pro test sees how quickly a machine can export a five-minute, 33-second project from our Verge video team. On average, it took six minutes, 40 seconds, which is slow for the level of specs inside of this laptop.

To start using the Razer Blade 15 Base, you’ll need to agree to the following:

In total, that’s four mandatory agreements and 15 optional agreements to use the Blade 15 Base.

If you’ve used any of Razer’s Blade laptops in the past few years, you’ve essentially used them all. If not, you’re in for a treat with its keyboard and trackpad, which are among the best around. The keyboard has backlit keys, and you can customize their color or lighting pattern to be as extravagant or subtle as you prefer. Razer fixed the starting with last year’s model, so the layout is just as ideal for my 9-to-5 workflow as it is for gaming. Unlike every other laptop Razer currently makes, this one doesn’t have a Windows Hello-enabled IR webcam or any other biometric login method. It’s a disappointing omission, but sadly, not a new one. Our review from June 2018 criticized that year’s Blade 15 for the same thing, citing that the power button, which looks like (and should be) a fingerprint reader, isn’t one.

The arrangement of ports should be suitable for most people, but it’s one of the key areas where this Base model differs from the more expensive Blade 15 Advanced model. Both have a Thunderbolt 3 port and an HDMI 2.1 port (capable of up to 4K resolution at 120 frames per second) in common. Outside of that, Ethernet is exclusive to the Base configurations, while the Advanced models have a slew of exclusive ports and features, including a UHS-III full-sized SD card reader, a Windows Hello IR webcam, up to 20V charging via USB-C, along with Bluetooth 5.2 and Wi-Fi 6E. I’d happily trade an Ethernet port for an SD card reader in the Base, but getting one in a 15-inch Razer gaming laptop will bump the cost up to $2,499 at minimum — and you’ll lose the Ethernet port. The strategy of sectioning off ports based on the model cost is outdated and out of touch, given that this machine is nearly just as capable for creators and gamers as the Advanced model.

The last thing I’ll touch on is the heating and cooling, which is something Razer has struggled a bit with past models. During gaming, this one gets toasty as well, but it doesn’t seem noticeably worse than before. It also didn’t cross my threshold of what I’d consider to be a loud laptop, even during intensive loads. Also, its 65Wh battery can last about six hours. That’s Razer’s claim for longevity, and my experience matches up with it when in battery saver mode.

The Blade 15 is a competent, well-designed gaming laptop that first-time buyers will adore for many reasons. This particular configuration is noteworthy as the first Base with a luscious QHD display, and with it, the RTX 3070 performs well for both gaming and productivity. The lack of biometrics and an SD card reader might be bothersome for some, though, since the step-up Advanced model has both. Beyond that, it’s tough to give the Blade 15 Base a pass again when it’s getting easier to find other similarly priced thin and light gaming laptops with just as many features and sleek designs.

Photography by Cameron Faulkner / The Verge

Update 12:43PM ET, March 22nd: Nvidia’s graphics driver 461.92 fixed the display issue we experienced with the Blade 15 Base. The laptop can now switch between Optimus and the dedicated GPU without issue.

View all stories in Gaming